We finished our middle sons room (he’s ten years old) this past weekend and I finally had time to take some photos of the finished product to share! Too bad it was a cloudy day and not the best for photo taking but whatever. The former “card room” in the building is 20x30ft and we split it in half to make our boys rooms. So each boys room is now 15x20ft and still pretty darn big! Atom worked with both of our boys to help them design their own unique, one of a kind space. For our middle sons room he chose a Star Wars/Harry Potter/Lego mashup theme. Before starting construction, we pulled up the carpet and finished the original wood floors that were underneath.

After the floors were done, we had to figure out how to attach the wall frames. This wasn’t an easy feat because there is no drywall or wood beams in the walls. They’re stone and block. Good thing Atom’s handy and resourceful! 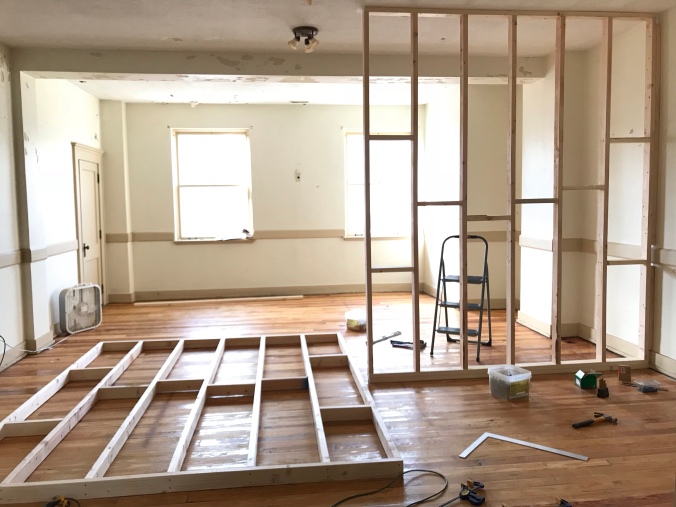 Our son chose to have a sort of balcony where his bed would go with a more open concept. He told us it would be a “cool hangout space.”

Then it was drywall time! I think we went through an entire bucket of drywall screws on this room alone. This next photo shows the long pass through closet area that connects both sides of their rooms. There is a set of sliding doors so they can get to each others rooms but only if they each agree as they both have a lock on their sides so if they both aren’t open the doors stay shut. They also have a rotating door up top between their bed areas that have locks (and a cat door!) to get to each others sides if they want. Privacy is important for preteen boys! 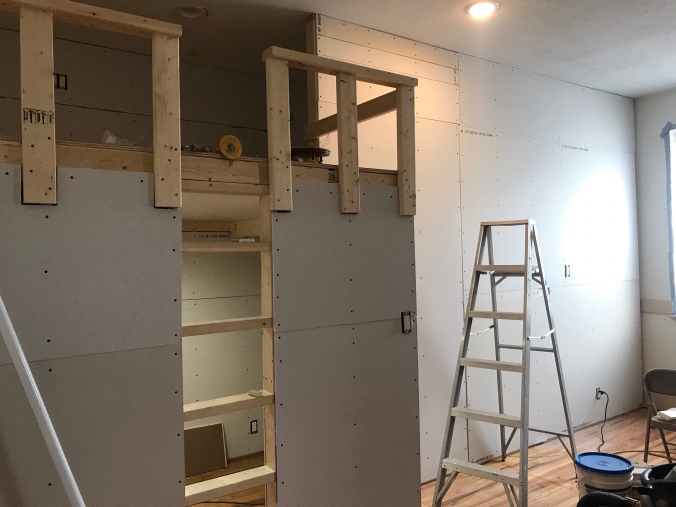 I’ll spare you all of the in-process mudding, sanding and painting photos and get to the final product. We let our kids choose whatever paint colors they wanted for their rooms. Middle son chose green and blue. 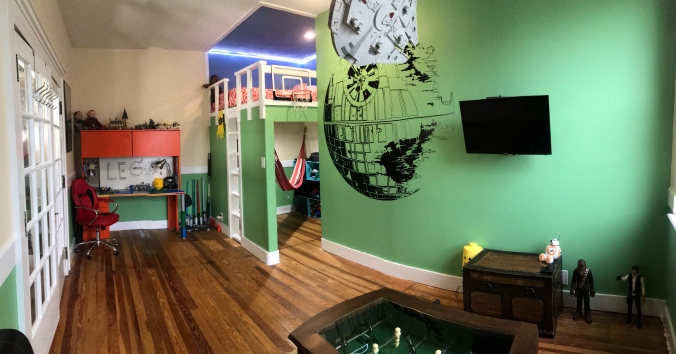 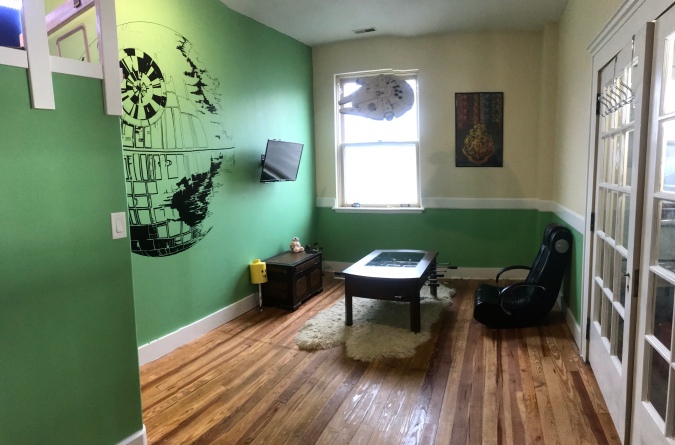 This desk was given to us and our son chose orange paint (it’s a metal desk so we are limited as to what we could do to it) to make it a statement piece. We glued large lego build plates to the surface and it has become our Lego obsessed son’s dream building space. The white dry erase board behind it folds down to cover the build plates so he also has a place to do homework and other things that need a smooth surface. Our son begged for the past four years for a “fancy” red leather desk chair and this year was the perfect year to get it for him and he was absolutely shocked and surprised on Christmas morning! He is also an aspiring ventriloquist and he wanted to display two of his antique ventriloquist dummies on the top along with his favorite completed Lego creations. 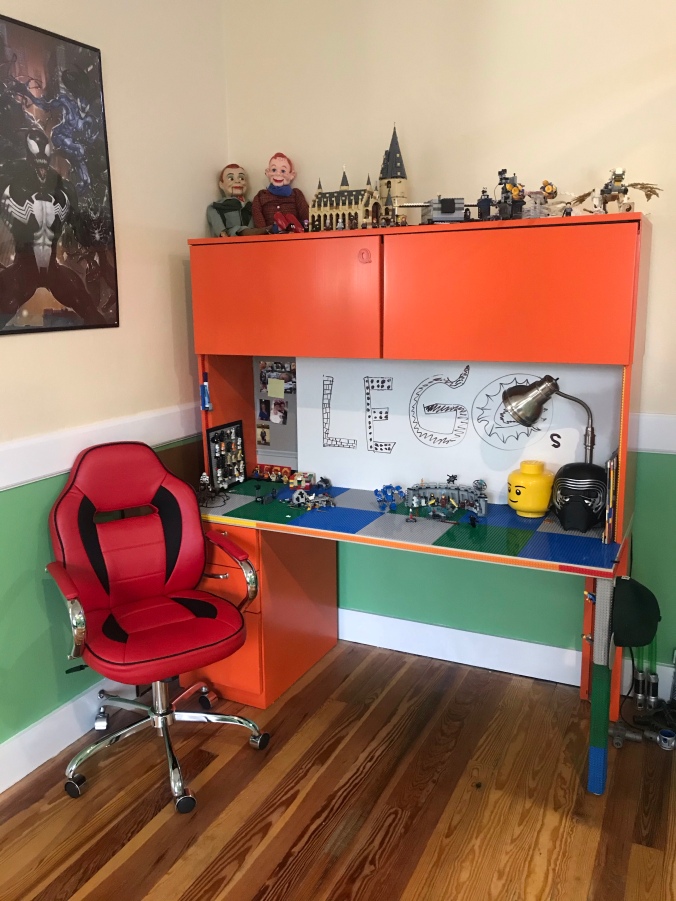 He chose a ladder to get to his bed vs a set of stairs (like his older brother wanted). There is a fun lighting strip along the top of his bed area that he can control from a remote and change the colors, make them blink etc.

For his side of the closet he opted for these square bins to put his clothes away in rather than a traditional dresser. He is quite the perfectionist and loves having his space neat and tidy and very organized. A rare quality of a 10 year old boy! The hammock can hold the weight of an adult man (aka Atom) and is a pretty neat space where our son likes to relax and read. 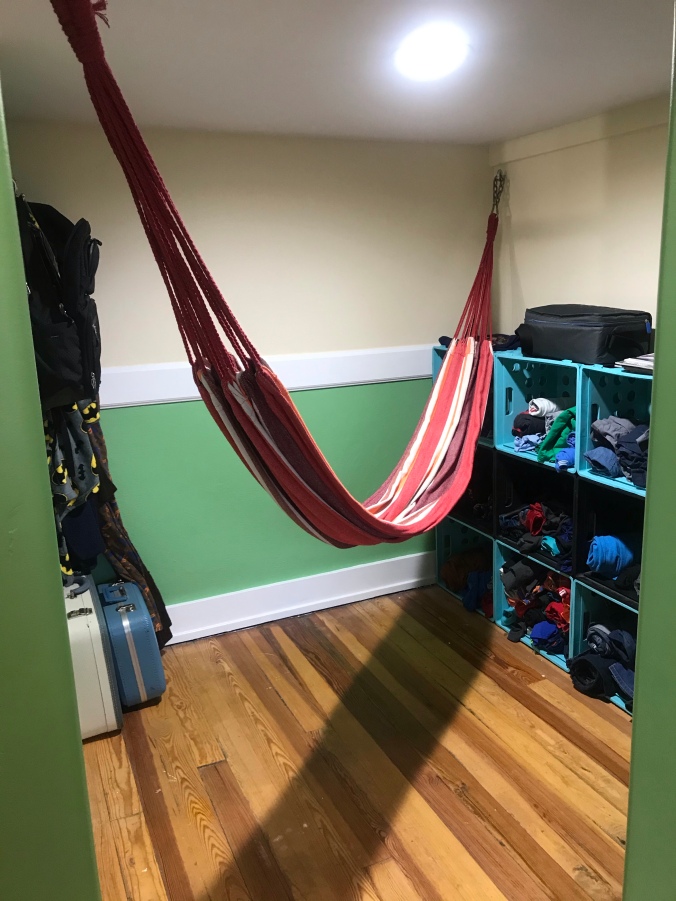 And now to the statement piece of the entire room.

We love Star Wars and our son asked Atom to paint this mural on his wall. I know I have mentioned it in the past but Atom is an incredible artist. I’m not just saying that because he’s my husband and I love him. He really is THAT talented! He sketched this out entirely by freehand and it is 6ft tall and 6ft wide. 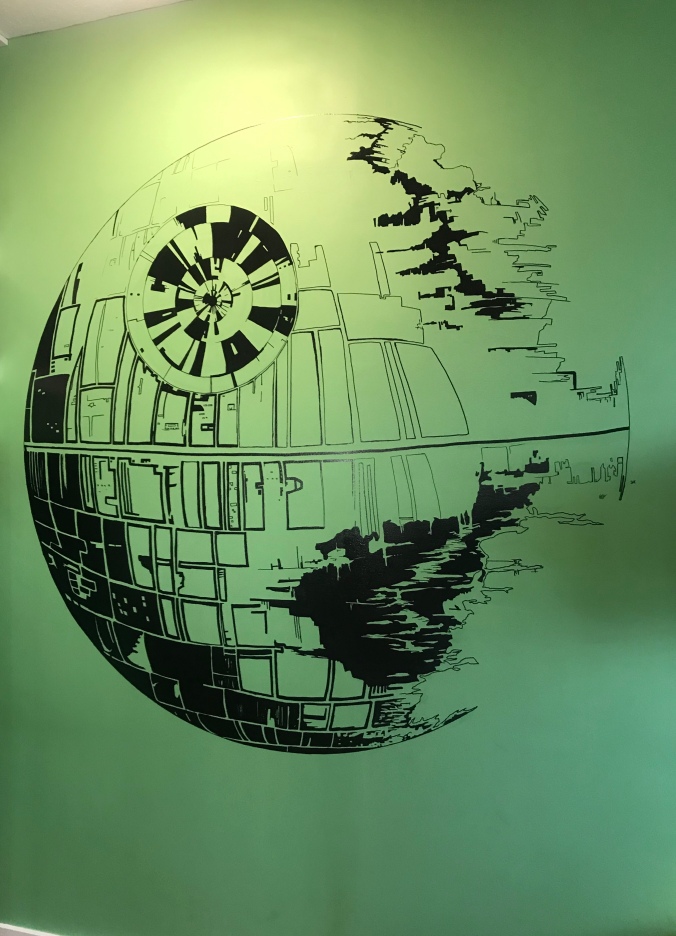 There are a few tiny details that you wouldn’t notice unless you look really close that Atom included in the mural.

There is a teeny tiny X-wing shooting a Tie fighter, and also the Tie fighter hangar hidden. I took some close up photos of those two parts.

And there you have it! We have one super happy son and our oldest’s room on the other side of the wall is now in progress and I can’t wait to finish it and give another before and after!

May the force be with you!

Because why not renovate two bathrooms at the same time?? This is the teeny tiny master bath which only contained a sink and a toilet. It’s a whopping 4ft x 10ft. I totally forgot to take a complete before photo prior to removing the sink and part of the floor and some concrete grinding but you get the idea. We will be installing a shower where the toilet currently is. Atom bought some gorgeous natural white marble tile for the floors that seriously looks like glitter. 🤩🚿🚽🚰🤍
Our first baby peach! 🤩🍑 #freemasontomansion
Fresh picked cilantro from our volunteer garden makes me ridiculously happy. 🌿🌱🥗 #freemasontomansion
Tonight Atom removed the old sink in the tiny master half bath (which will become a full bath) on the 2nd floor in preparation for the simultaneous reno along with the upstairs 3rd floor bathroom. Because why only renovate one bathroom at a time?! 🙄🙈 The pipe is currently leaking into a bucket while Atom is downstairs gathering the tools to cap it off. Meanwhile all I hear from our bed is drip drip drip drip..... 🚰💧💧💧🙉 #freemasontomansion